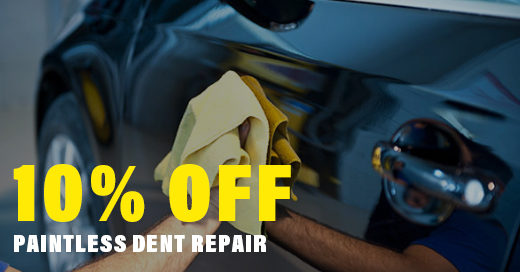 For those South Floridians who take great pride in their vehicles, few things are more annoying than a senseless dent. Whether caused by a careless person who slammed their car door or shopping cart into your car, hail, or even your own oversight, every time you see that dent, your anger renews.

Many people just live with these annoying reminders because they think that dent repair is too costly. Not anymore. Especially because this month when Grieco Collision Fort Lauderdale will give you 10% off your paintless dent repair service.

But first, you are probably wondering…

What the heck is Paintless Dent Repair?

Paintless Dent Repair or Paintless Dent Removal (PDR) is a fast-growing less-intrusive method for vehicle dent repair. Grieco’s expert technicians use state-of-the-art technology and specialized tools to slowly push and massage minor—and sometimes major—dents back into place. They approach the dent from the back of the panel using precision and patience. No need for paint. No damage to the vehicle’s factory finish.

What kind of damage can be repaired with PDR?

All sorts of damage can be repaired with PDR—many of them are prevalent right here in Fort Lauderdale. Commonly used for hail damage, door dings, creases and body line damage, PDR is equally effective on both aluminum and steel panels. As long as paint and metal are not stretched—as with some very sharp dents or creases—larger dents can also be repaired using this method. But in general the shallower the dent, the more likely PDR will be a suitable method of repair.

What are the benefits of PDR?

This ingenious method invented in New York City at the International Motor Sports Show in February of 1960. Oskar Flaig, a technician for Mercedes, was responsible for fixing scratches and dents and any other damage the show cars incurred in the evening so the cars would look perfect the next day. Using a hammer handle to push out a small dent—so he could apply less filler before painting—Flaig found that the result looked perfect with no need for further work. So it began.

Do you have a dent that’s driving you crazy? Thought it would be too expensive to fix? Contact Grieco Collision Center today at 888-451-0538 to receive 10% off your dent repair service.

Redemption: Please present offer at the time of write-up. Coupon cannot be combined with any other offer. Limit one per customer. See dealer for details.